Craft swords & sell them to heroes.

Crafting requires ingredients, click stockpile (boxes on the right side of shop) to buy ingredients. Here's a full crafting tree how to build a sword:

Be careful heroes are busy and they wait only 20 seconds to buy their sword, if any hero leaves you will lose the game

There's only space for 4 heroes in your shop, if a hero doesn't have space to come in the shop you will lose the game. Each hero comes quicker than the previous one, so keep some stock.

Your final score is determined by how much money you made.

Took me a bit but I got it. The break through was noticing that clicking the boxes opened up my inventory and I could order items through there.

Yup, I added in the game's description that you should click boxes, but in retrospective I should've highlighted and/or displayed some arrow on the boxes.

It is easy to find things in retrospect that should have been added or left out.  I think it can be easy as a developer to forget that new players don't know what you know. I remember the first tactics game I played. I didn't know I could select different party members by pressing R & L. I played the first five or so missions with only one character and a 'guest' character. Eventually, I felt I was missing something because I could find more people than I could deploy in the equipment menu.

I think I eventually searched the manual and found a tip on how to select different people. It was long enough ago I don't really remember how I found the answer to my problem, but I did have to look it up.

I guess that is the value of doing little projects like this. You can quickly learn developer lessons.

I love this concept of merging crafting with time management, but I couldn't figure out the controls for the game. I couldn't tell how to get materials or how to use the stations. I could place them though. Sometimes I could click a customer even if I didn't have anything to give them? There wasn't any feedback to the player for me getting paid or if the customer was happy. Really nice visuals though!

I assumed my money going up meant I got paid but a $ or something could have been nice, too.

I noticed that you start with 1 sword and materials to make 2 more so that is where the clicking starts from. The boxes you build are used only to make items. It turns out the background boxes are actually a key part of the interface and those show what your inventory actually is. You can also buy items from there as well.

I assume the master play is to buy the cheap items and build the more expensive ones.

Hi, thanks for your comments. Indeed my game could use a lot more feedback, but I mostly ran out of time and energy to properly add that. As Creus pointed out there's a stockpile (a stack of boxes on the right side of shop) where you can see all the items you have (and can order more). 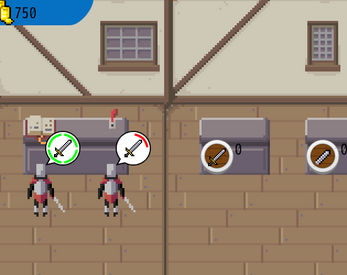